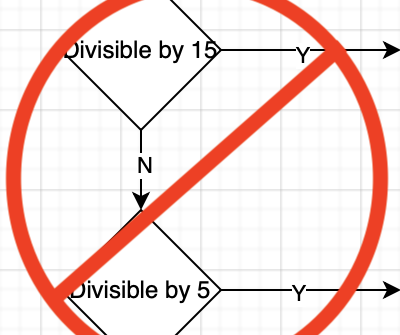 In this writing I aim to complete a Fizzbuzz without if statements, conditionals, pattern matching or even using modulus calculations. And if that isn’t enough I thought I’d use the opportunity to explore Haskell.

The idea originated in the Friday lunchtime “Curry Club” at HMRC Digital where a few like-minded software engineers are getting together to teach themselves Haskell. (For those not in on the joke, the language is named after the logician Haskell Curry). At one of those sessions, talking about ifs and conditionals the challenge was posited that a Fizzbuzz can be done without ifs.

A Fizzbuzz test is a fairly common programming challenge, often used to evaluate a developer’s skill level. The basic instructions are as follows

Write a class that produces the following for any contiguous range of integers:

e.g. Running the program with a range from 1-20 should produce the following result:

Now, I’ve marked a fair number of fizzbuzz challenges in my time and the most important piece of advice is: Keep it simple!

Under normal condition, the following pseudo code lends itself to the better solutions:

It does not try to be clever (many candidates fall down because they want to show off the latest shiny technique, but technical interviewers wouldn’t be looking to that) and does the job. Simple!

So how could this be achieved without if clauses or using modulo calculations? I would class pattern matching as cheating here, so the following scala snippet would also be disqualified:

I’ll just go ahead and show what I ended up coming up with:

Now I will break it down. The intuition was that I would be able to use a method loosely (very loosely) inspired by the Sieve of Eratosthenes, whereby I would create lists of functions that would replace every 3rd element by “fizz”, every 5th element by “buzz” and every 15th element by “fizzbuzz”.

So essentially what I was after are lists like so

where any non-empty values replace the values in the previous list. To do so, I use a mixture of replicate and cycle.

This creates a list where the id function repeated n-1 times followed by a lambda that ignores the input and just replaces it with a value. So if a call this with n=3 and v="fizz", what I get is:

Then I use the cycle function to create an infinite repeating list. This makes use of the fact that Haskell is lazily evaluated, meaning that I list can be defined as infinite but its constituent elements are not created until they’re used, so:

This gives me my replace function:

whereby zipWith ($) listOfFunctions values creates a new list that applies the first function to the first value, second function to the second value, etc, so, if call this with n=6 and v="fizz" and xs=[1..6], the following substitutions can be made:

So to put it all together, we then want to replace all the “fizz”, “buzz” and “fizzbuzz” entries in our list, to do that I think the dot operator in Haskell makes for nice reading:

just creates a single function that first replaces all the “fizz”, then “buzz”, then “fizzbuzz”

We just combine the function with our list and there’s the Fizzbuzz answer:

In summary, I’ve tried to get an alternative view on how a Fizzbuzz can be implemented, without using the traditional tools. Now, if I’m honest, if I were to mark such a submission, I would be disappointed that it doesn’t allow me to use arbitrary ranges. My solution above would not provide the correct answer for a range that doesn’t start with 1.

This was a fun exercise and hope will give you some food for thought.