I had found a vulnerability that made it is possible to insert maliciously crafted XML into the SAML payload that a reauthentication application returned to perform a Denial of Service (DoS) attack. The vulnerability came about due to the use of a out-of-date but still widely used library.

The service could have been made to consume a lot of CPU and memory causing it respond very slowly if at all. Health checks and automatic service restarts would have healed the service but it still would have allowed an attacker to mount a sustained Denial of Service attack without needing a lot of requests.

This post describes the vulnerability found in the opensaml-1.1 which was used to reauthenticate request. In this instance the reauthentication between apps worked by sending a payload to the reauthentication app, which then revalidated username/password and then returned the payload as a SAML assertion. This would be sent to the browser and POSTed back to the originating app.

The underlying SAML assertion would look something like that:

I ran the OWASP dependency checker against the dependencies

and found the following vulnerability

The embedded doctype and the LOL entities that result in the XML processor processing a LOT of “lol” ENTITIES - hence the name billion laugh attack.

Here is what it did to my local JVM: 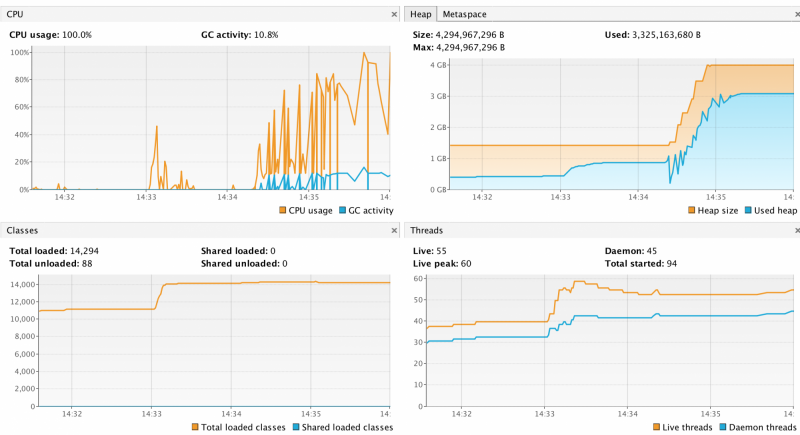 and that is just a single request.

I rewrote the code to use OpenSAML 3.3 which is not vulnerable. Unfortunately, as the API for OpenSAML changed significantly that wasn’t just a matter of changing dependencies but rewriting the SAML generation code from scratch…

Moral of the Story